Where Things Stand: the Green, the Library Wing 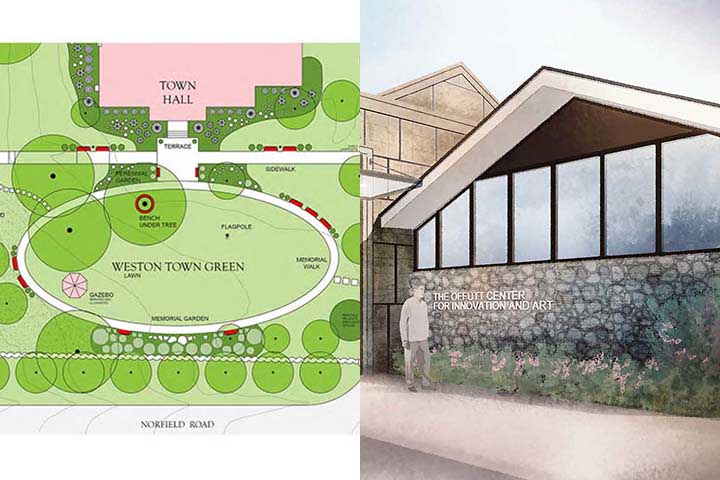 Proposals to add a new wing to the Weston Public Library and build a Town Green received much public attention this fall and approvals from the Historic District Commission. In both cases, much remains to be done. Here is where things stand.

Plans for a Town Green include an ambitious design and, based on very preliminary estimates presented to the Selectmen in November (including a few guesses), a need for ambitious fundraising.

The project involves a lot of earthwork, new top soil and grass, new trees and plants, and moving and replacing boulders as part of a complete renovation of the memorial garden. An elliptical pathway will be built, benches will be replaced, new signs and lamp posts will be installed.

Those very preliminary cost estimates add up to over $400,000. As much as another $100,000 may be required to fund high maintenance needs in the first two delicate years as plantings take root. None of it comes from taxpayer funds, except for a modest amount the Town set aside this year for several signs and lamp post replacements. We expect the fundraising effort to begin soon. Help is already on the way.

Richard Orenstein, the trustee of the Daniel E. Offutt, III Charitable Trust, has offered to donate $250,000 to the Town Green project if the Beautification Committee can raise $250,000 from other sources, most likely through a 501(c)(3) non-profit to be formed.

First Selectman Chris Spaulding said he is "extremely grateful for Mr. Orenstein's generous pledge," and looks forward to the Beautification Committee's fundraising campaign. "I have no doubt they will be successful," he said. "We look forward to celebrating many wonderful events on Weston Town Green in the future."

Along with other gifts to Weston, Mr. Orenstein has offered to provide up to $5 million to build a new wing at the Weston Public Library, dedicated to the memory of Daniel Offutt and focused on art and innovative technology. The Town formed a special committee several months ago to help guide the process. Now that the conceptual design has been approved, the Offutt Center Committee's work has begun in earnest.

The committee met on November 7 to define expectations and set a meeting schedule. It is chaired by First Selectman Spaulding, who will not vote, assuming anything requires a vote. The other members are Steve Ezzes (Board of Finance), Jon Rogers and Richard Wolf (Building Committee, and in Mr. Wolf's case, P&Z), Anne Hunt, Amy Sanborn, and Amy Jansen of the Library Board, Library Director Karen Tatarka, and Gwen Lomas.

Mr. Ezzes began the meeting by polling the committee. He asked for assurance that all members are in favor of the project, saying, "It's important to get this right." Everyone said yes.

In the next few months, final construction documents will be drawn, surveys will be done, and a host of other tasks will be completed. A memorandum of understanding must be executed with the Offutt Trust, and a full view must be developed of how the new wing will operate and be funded.

In November, the committee agreed that the first step is to engage the services of a construction cost estimator. That has occurred. The numbers should arrive soon, including the "hard" costs of construction and the "soft" costs of fixtures, furniture, and equipment.

The entire package should be put before the town for a vote early next year.