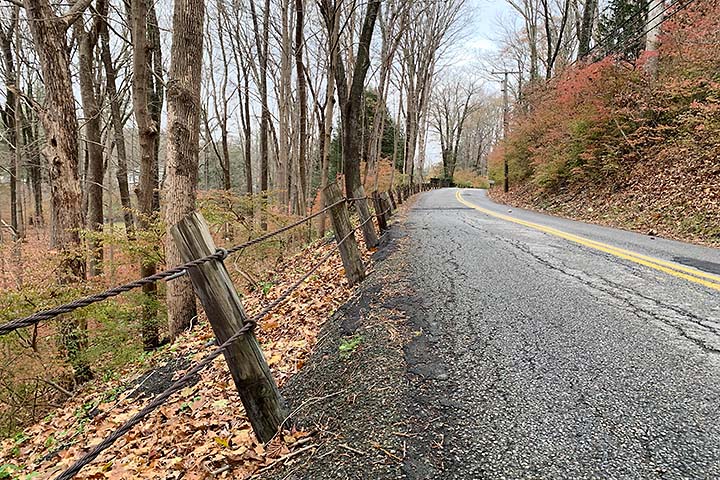 The steep, narrow shoulder of a 320-foot section of Valley Forge Road is so badly eroded that the Town has allocated $228,000 from reserves for emergency repairs this winter. The road will be closed for three to four weeks from Davis Hill Road to Old Stage Coach Road.

Public Works Director John Conte described the situation to the Selectmen on November 7 and to the Board of Finance a week later. Both boards discussed options and explored the urgency of the need. The supplemental request was ultimately approved.

Mr. Conte said the work can and should be done this winter. Otherwise, he said, he would recommend a complete closure.

Going north on Valley Forge from Davis Hill Road, toward the reservoir, the damaged roadside is on your left, about 100 feet from Davis Hill. The shoulder is only about two feet wide, the top of a slope that drops down sharply about 30 feet. There is no built-in drainage, so rainwater flows down the slope, speeding the erosion.

A steel cable guard rail is seriously tilted. Mr. Conte is concerned it will not hold a sliding vehicle on a slippery winter surface. According to Selectman Stephan Grozinger, a volunteer firefighter, tall trucks such as fire engines already feel an unsettling shift on this part of the road.

Mr. Conte said he expects work can begin about a month after a contractor has been signed. During construction, traffic will be detoured along Old Stage Coach and Kellogg Hill roads.

The slope and shoulder will be rebuilt by driving a network of 15-foot steel rods into the side of the hill, perpendicular to the road. The rods will be capped and sealed with a wire mesh, forming a sort of superstructure of timbers and steel to be covered with concrete, producing a solid foundation and a three-foot shoulder. 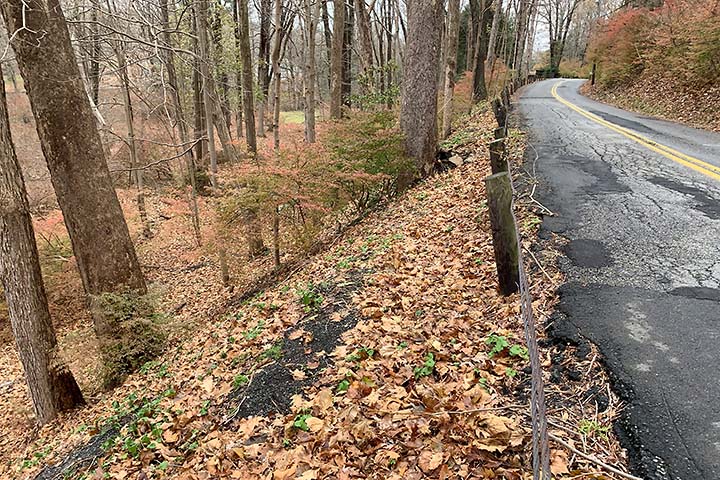 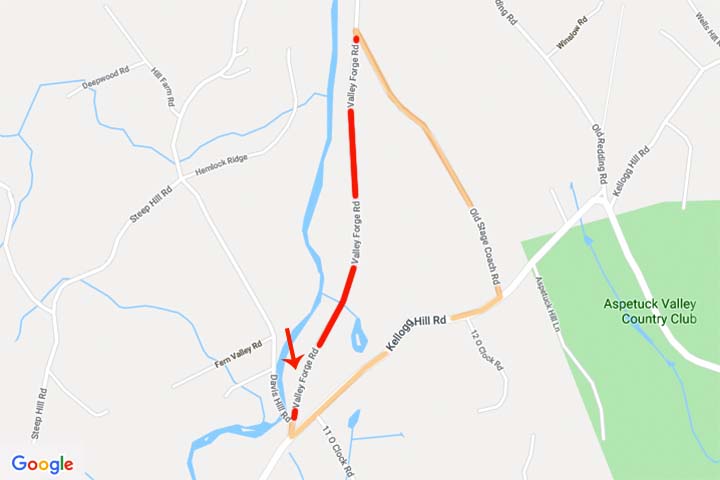 On the map: The red arrow points to the general area construction will be done. The red line indicates the portion of Valley Forge that will be closed during construction. The yellow line depicts the detour.