A Veterans Day ceremony organized by the town's Veterans Affairs Committee featured perfect weather, a nice gathering, music by the Weston Middle School band, an address by the First Selectman, and well-deserved recognition for those who wore the uniform.

Earlier in the day, veterans were treated to breakfast at the Middle School and honored at an all-school assembly. After the ceremony, they were driven to Weston High School for lunch.

The Middle School breakfast was hosted by Principal Daniel Doak and a committee of volunteers. At the assembly, veterans received a hero’s welcome from students as veterans representing World War II, Korea, Vietnam, Iraq, and Afghanistan entered the gym.

Students had taped handwritten notes to the wall thanking veterans for their service and for keeping them safe.

Keynote speaker Bill Rother, who was commissioned as an army lieutenant in 1957, shared stories with students about his service, telling them that "you have to learn to take orders before you give them." He then entertained the students by playing Won’t You Come Home Bill Bailey on his banjo. 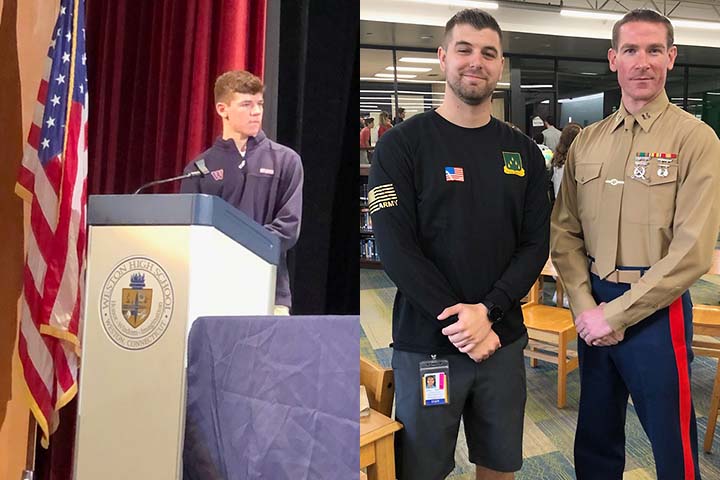 Two Middle School teachers are favorite veterans. TJ Adams, a sergeant in the US Army Calvary Unit from 2011 to 2015, became a physical education instructor this year. Peter Dey, who was a Marine captain, has been a sixth and seventh grade English teacher at the Middle School for eight years.

After the assembly students filed into the library to take part in an eight-minute round-robin living museum with the veterans, who shared stories about their service. Students had an opportunity to ask questions as they moved from one veteran discussion to another. Mr. Adams and Mr. Dey told curious students about their service in Iraq and Afghanistan.

At Weston High School veterans once again were given a hero’s welcome in the school cafeteria for a luncheon organized and paid for by the American Heroes Club.

Student Jillian Zuch recited her poem You Fought about the hardships veterans experience leaving their families at home, concluding that when they return home, veterans stand as loyal and true as they fought for our country, "the best thing anyone can do." 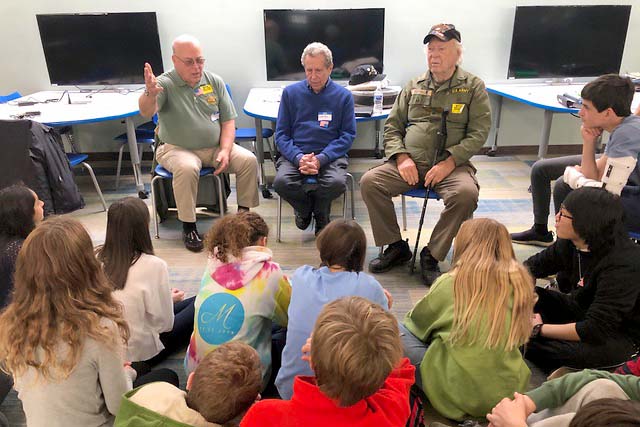 Two afternoon back-to-back assemblies in the high school auditorium followed as veterans participated in a panel discussion moderated by American Heroes Club leader Larry Shore. Weston veterans Tom Moore, Jay Smith, Ed "Hutch" Hutchins, Woody Bliss, and Andrew Cummings participated in the panel, telling students that their service defined them and aided them once they mustered out of uniform into professional lives.

By the end of the events, there was general agreement that Weston's Middle School and High School did an outstanding job recognizing, saluting, and thanking veterans for their service. 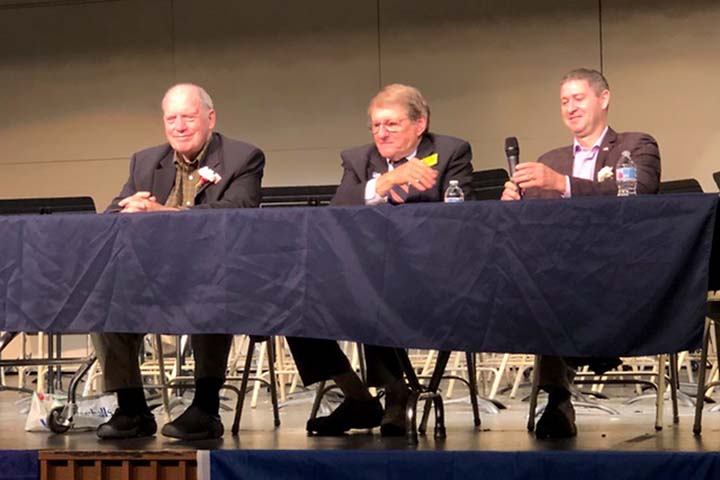 Reporting from the schools by Vicki Thomas. Ms. Thomas is a member of Weston's Veterans Affairs Committee.