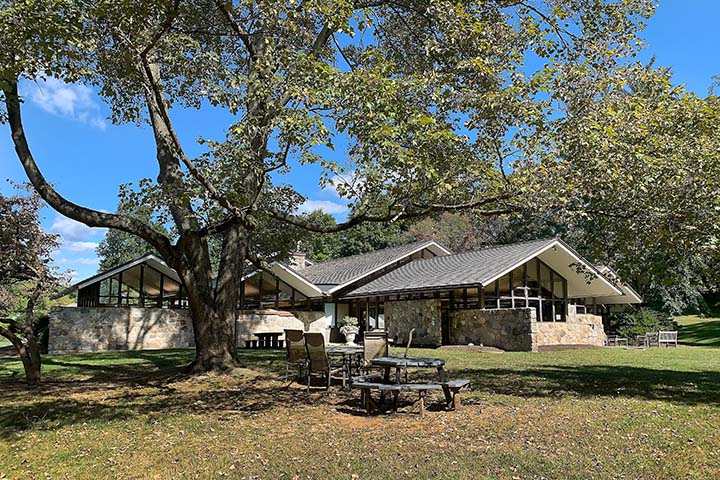 The Historic District Commission meets again on Wednesday evening, October 2, regarding the proposed expansion of the Weston Public Library. It takes place at 8:00 in the Town Hall Meeting Room. Architect Hanna Przada will continue the discussion with commissioners about her design.

Meanwhile, the existing Library has seen a significant increase in activity in the past two years, a growth that may be tracked directly to its 2017 renovation. Even beyond the proposed addition of an arts and innovation wing, funded by a gift, more improvements are on the way once funds for an already-approved State grant are unfrozen.

Library use is up 14 percent since renovation, with nearly 68,000 visits already this year. Library Director Karen Tatarka reports that after-school use by students is at an all-time high. Defying the digital trend — and, according to Ms. Tatarka, the experience of most libraries — circulation of print books has risen 25 percent while growth of e-book checkouts is relatively unchanged. But at the same time, audio books are increasingly popular.

Use of the children's library has risen 42 percent, and the young adult section is up 58 percent. The number of children participating in the summer reading program doubled.

A variety of Library programs have drawn well this year, attracting over 8,000 participants. Storytime sessions and crafts programs for children are quite popular, as are adult programs such as the New Yorker Roundtable and Camera Club. Author talks and After Dark programs have been well-attended, and the Library often partners with community organizations such as the Senior Center and Commission for the Arts. Friends of the Weston Public Library sponsors several well-received programs of their own.

The delay in State grants is a frustration, but will probably be resolved in the next few weeks. Earlier this year, the Library was awarded a $82,500 State Library Construction grant to renovate the Children's Room and upgrade fans, windows, and lighting. Matching funds were provided by a combination of money from the Town and the Library Board's endowment. But the State's portion has been tied up in an ongoing tussle in Hartford over how much in total the State will bond this year.

Other than that, it's all good news for the Weston Public Library, except that they are out of room.

Art programs are popular at the Library, but no space can be dedicated to them. They are usually held in the Community Room, which wasn't designed for that purpose and poses maintenance challenges. The small space for maker programs is insufficient for the increasingly popular technology programs. Ms. Tatarka notes that Weston's public library has fewer square feet to work with per capita than most neighboring towns.

That would invert if the expansion project is approved, not only by the Historic District Commission, but also in the steps that follow, including a town vote. Ms. Tatarka is excited by the prospect, and also enthusiastic about the support the Library receives. "They've been terrific across the street," she said, a reference to Town Hall. "Everyone has been supportive: the Library Board, the Friends, and just about everyone who walks in the door. We're all very happy, and very excited about the future."