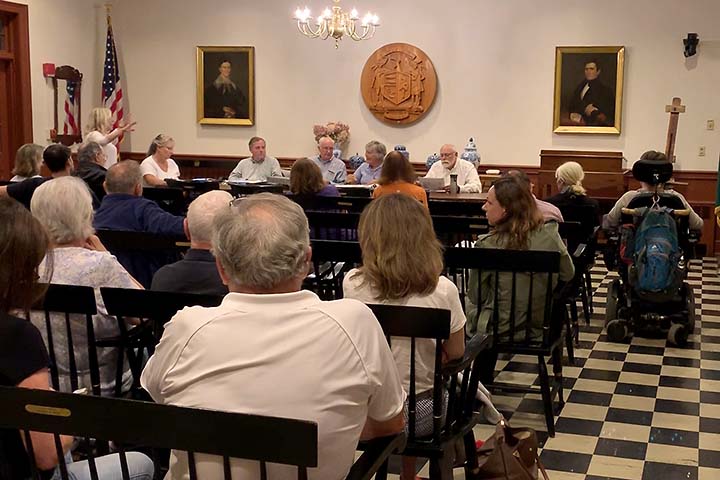 In an evening meeting on September 4, Weston's Historic District Commission approved an application by the Beautification Committee for a Town Green in an area in front of Town Hall and the Library.

The meeting was much shorter and far more subdued than the commission's August 7 hearing, which drew a large turnout, mostly of supporters. The vote was 4–1 to issue a Certificate of Appropriateness, which means a majority of the commission found no reason to deem the plan, designed by Beautification co-chair Nancy Thiel, an architect, incongruous with the character of Weston's Historic District No. 1.

The commission's action gave the final approval needed for the plan, which will be funded almost entirely by donations. The Board of Selectmen and the Planning and Zoning Commission had already given their assents.

"We are so delighted that the HDC has approved our design for Weston Town Green," said Ms. Thiel. "The one thing we've heard time and again is that most everyone wants places to meet and visit with neighbors. This new town park will, over time, become an important and memorable place in the town’s history."

The commission's approval included a stipulation that members will receive more information, and presumably offer more input, on newly-designed memorial garden monuments. Ms. Thiel had no objection, as plans for the monuments are still being developed. Eventually, the garden will contain memorials for all American wars. Existing plaques will be used and new ones created, all situated at a height friendly to children and those in wheelchairs.

Praise for a Critic

In her comments after the meeting, Ms. Thiel praised commissioner Lynne Langlois, who had previously been perhaps the most vocal critic of parts of the plan.

"I'd like to say a special thank you to Lynne Langlois," said Ms. Thiel. "Robust civil debate makes our work better. She challenged us and we are grateful for her smart, considered comments."

One of Ms. Langlois's principal concerns had to do with the aggregate material to be used in a walkway on the Green. Because it contains a resin binder, she feared it would be shiny and look like plastic. Her concerns were alleviated by a trip to Waveny Park in New Canaan, where the material is used. There, she found the aggregate has held up well over many years, and despite having a more regular pattern than conventional material, is virtually indistinguishable from it.

Commission member Chris Kimberly was the sole vote against, having objected to benches being fixed to concrete foundations. Ms. Thiel had already told the commission this has become a standard feature in parks, one meant to preserve the design of the space, avoid clutter, and provide easy maintenance.

The hard work of the task the Beautification Committee has taken on has only just begun. In what we expect will be a relatively short period of time, designs will be finalized, bids will be solicited, received, and approved. The work will not be finished by Founders Day on October 11 this year, but Ms. Thiel expects the Town Green to be complete well before next year's celebration.

Expect to see a fundraising effort launched very soon. Ms. Thiel is confident of its success. This is, in essence, a crowdsourced project.

The Town is responsible for sidewalks, signs, and lamp posts. Sidewalk construction is already funded by State grants. New signs have already been budgeted. A few lamp posts will be purchased. Everything else will come from donations of time, talents, and money.