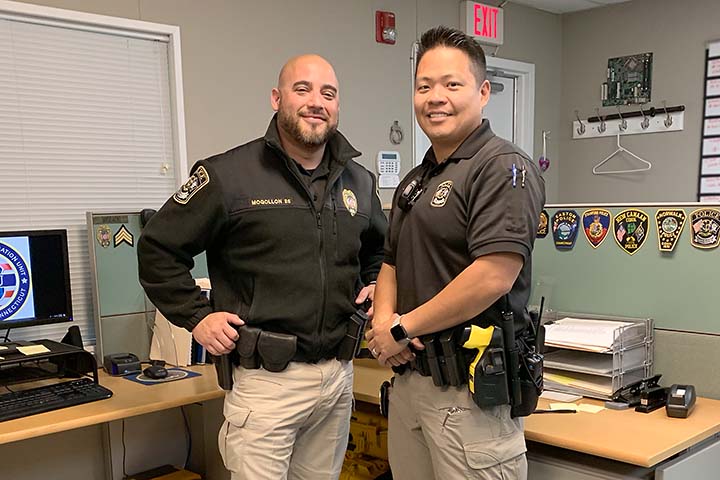 Over the past several years, following unspeakable acts of violence in schools far away and a particularly shocking one nearby, Weston has invested millions to prevent a similar tragedy here.

The investment runs deeper than physical measures, most of which cannot be disclosed, to bar entry by an armed intruder. A safe school is one that also protects students from any number of potential threats to their well-being and, to the greatest degree possible, keeps those things from happening.

At the center of the effort are two School Resource Officers (SRO) whose role is simultaneously appreciated by almost everyone but widely under-appreciated for its depth and scope.

Weston Police Officer Joe Mogollon has served as SRO at Weston High School for three years. Officer Jason Kim was assigned to the job at Weston Middle School last year. They are two of Weston’s most highly-trained police professionals.

We met at length with the officers at a facility many in town do not know exists. Joining us was Captain Matthew Brodacki, their supervisor, who Officer Kim said "is actually our informal therapist."

"It's a challenging job," said Officer Kim. "You're dealing with situations that, as a regular patrol officer, you might never encounter. But it's rewarding because you get to do what's right for each child. You ask yourself how you can keep this child safe, how you make the child and the family better. And then you come up with solutions."

School Resource Officers are commissioned, sworn law enforcement personnel, not security guards. They would certainly be ready and able to respond to a violent situation, but their main function is to prevent situations from arising in the first place, including threats, assaults, self-harm, harm to others, bullying, substance abuse, and inappropriate or illegal use of social media.

This year, the officers also conducted programs, tailored for age differences at their respective schools, which used simulators to make students highly aware of the dangers of drunk driving. A similar program at the high school focused on driving and texting, where students saw danger in attempting to navigate an obstacle course in a cart while distracted.

This summer, as in prior years, the SRO’s own education will continue as they learn about new techniques and program concepts at NASRO seminars.

"At first," said Officer Mogollon, "students see you as just another rough and tough police officer. Over time, as you build relationships and trust, they see a different side, that you’re here to help."

Officer Kim, who was an SRO for five years in New Canaan and supervised its program, agrees. "A lot of it has to do with trust. The first part of the job is building relationships, getting to know the kids and their personalities. It’s also important to do that with parents, too. And teachers, and staff. You have to get to know them, and they have to get to know you."

"We know it’s working," he added, "when there is an issue, and kids or parents come to us proactively asking us to get involved."

"In some respects," said Officer Kim, "you have two different worlds: the school world and the police world. You could say they are like oil and water, which aren’t supposed to mix. But if you shake it long enough, they do eventually mix. We can work together as a team to anticipate problems and deal with them proactively while making sure everything is done legally, protecting students' rights and privacy."

Captain Brodacki is proud of a case where a student in crisis called 911 and asked for Officer Mogollon by name. It pleases him to know that students who feel a need to take shelter from the storm of teenage life feel comfortable finding it at lunchtime in the SRO’s office at the high school. He likes that one student’s misbehavior was better corrected with the reward of spending time with Officer Kim than it would ever have been with punishment.

At the same time, there are boundaries. "We always make it clear," said Captain Brodacki, "that we are police officers, and our job is to protect the community."

To preserve relationships, in the few cases where an arrest is warranted, it will usually be made by a patrol officer, not an SRO.

"In my view," said Captain Brodacki, "an arrest is rarely going to help a child. We have to find out what's going on and find a way to help them."

An alternative is a referral to the Juvenile Review Board, which Weston shares with Norwalk. Youths under 18 who have no record but have committed a misdemeanor can be diverted from the justice system to a process that requires no court appearance and leaves no criminal record. "But it has teeth," said Captain Brodacki. Failure to comply with prescribed remedies results in a court summons. Families and children must agree and commit to the process.

Captain Brodacki said: "At first, when the SRO program started, some parents thought arrests would go up, because the police are there to be enforcers. But they have actually gone down. That's the measure of a good program and all the hard work. Because of the outreach programs, instead of just showing up for 10 minutes and making an arrest, we know the child. We understand the family situation and how best to help the child."

Officer Kim said there are "always reasons kids are having a crisis moment. And sometimes, it's just a moment, not a chronic thing. We try to be there and give them a way to get back on track."

"Family difficulties are tough on kids"

Sometimes, the SROs learn of possible family issues as a result of police calls about domestic incidents. "We can’t violate anyone’s privacy," said Officer Mogollon, "so the school may not know about problems at a child’s home. What we can do is increase our interaction with the child, keep an eye out for signs of trouble like truancy, bad grades, or substance abuse, and generally be there for help and support."

"When your most basic needs aren't being met," said Officer Kim, "you can't be yourself."

He added: "There are also incidents that aren’t criminal but where we can still intervene to help. The student may be doing inappropriate things on social media, for example. We can step in front of it, contact the parents, bring the kids in, and counsel them. We can educate them that if they keep doing something they shouldn’t, it's not going to end well."

None of this could happen if the SROs were not on campus. "Unless you're right there," said Officer Mogollon, "you really can't make a connection. You can't understand what kids are up to, what's important to them, how they socialize, what music they like, how they communicate, their lingo, or much of anything."

"We're a little bit of everything," said Officer Mogollon.

They are also armed officers on campus if something horrible were to happen. So are police who are always on campus patrol during school hours. So are Chief Ed Henion and Captain Brodacki, who are frequently present at the schools. So are officers at headquarters next door and those on patrol around town. So are police in neighboring towns who monitor Weston’s radio traffic.

So are officers from other towns who are likely to be working in a special unit located on the school campus, which is where we met the SROs.

One of the temporary buildings — they have been "temporary" for over 20 years — that house the Town Hall Annex and school district administration also contains the Technical Investigation Unit of Southwest Connecticut, known familiarly as the Cyber Lab. It is a regional resource Weston shares with investigators from ten Fairfield County towns.

Captain Brodacki heads the unit. Sergeant Joe Miceli, who is also responsible for Weston’s Office of Emergency Management, is an investigator. So are officers Mogollon and Kim.

Officers in the unit handle the electronic part of criminal investigations. Mobile phones, tablets, computer hard drives, and internet records taken as evidence are examined and processed here. The unit works closely with the State Police. It is also part of the Internet Crimes Against Children Task Force, a national network of law enforcement agencies that continuously search for and prosecute use of the internet for child abuse and exploitation.

Officers in the Cyber Lab receive extensive training from the National Computer Forensics Institute (NCFI) on computer forensics and network intrusion. NCFI was established by the Secret Service and Department of Homeland Security. Training programs usually run for five weeks of 10 to 12–hour daily courses in Alabama. NCFI pays all expenses, and participants come home with thousands of dollars worth of equipment for free.

For the SROs, technical expertise has a side benefit: no student could possibly pull the wool over their eyes about inappropriate use of a device or the internet.

Captain Brodacki and Officer Kim have been deputized by the Secret Service to work on federal cases. In an extreme event, such as a large-scale network breach or nation-state cyber attack, they would be pressed into service. Captain Brodacki also teaches courses on cyber crime at NCFI and in seminars for prosecutors.

During our meeting at the Cyber Lab, a student called in to report a possible assault. Officer Kim radioed the campus patrol officer, who reached the student in seconds, and then was joined immediately by the SRO.

Also during our meeting, investigators from other towns were working on a case. As we wrapped up, one of them asked about Weston Today and the story, this one, we were working on.

"You guys in Weston are so lucky," he said. "You have all your schools on one short road. You have the police department next door." And then, gesturing to himself and the several other officers in the room, he said: "Plus all of us. Very, very lucky." 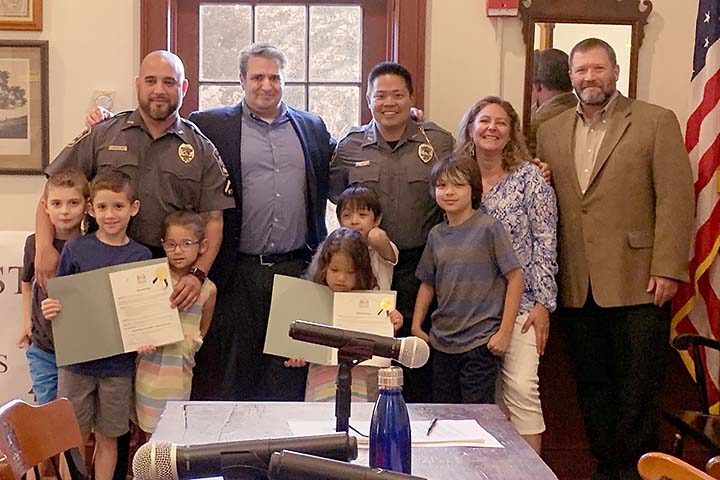 At a Board of Selectmen meeting on June 6, First Selectman Chris Spaulding declared a day honoring SROs Joe Mogollon and Jason Kim. His proclamation lauded the officers for their abilities, accomplishments, and the abundant applause they receive at any event. The officers attended the ceremony with their families. 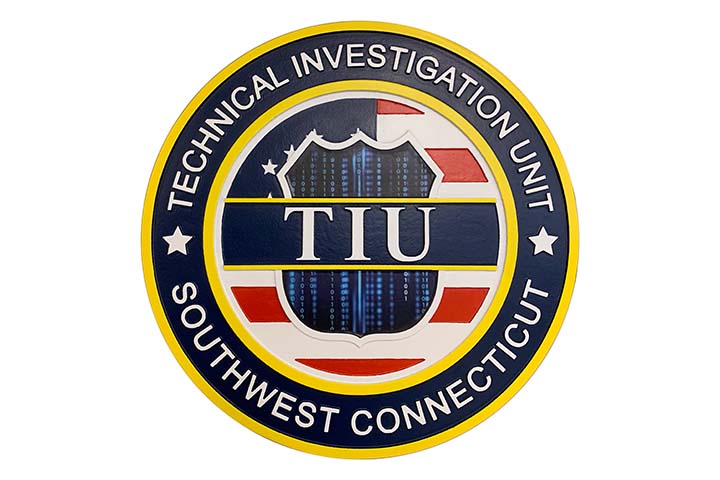