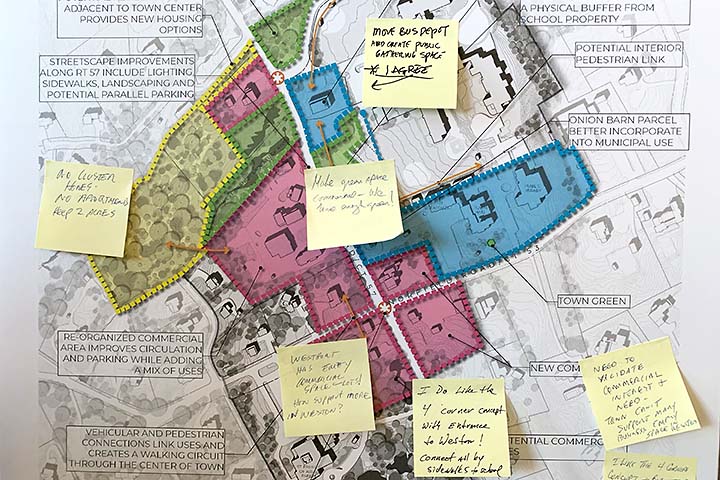 June 22, 2019 — On Monday evening, June 24, consultants from Milone & MacBroom will present plans they have developed for Town Center at a special meeting of the Planning & Zoning Commission. It takes place from 7:30 to 10:00 at the Weston Middle School Library.

The firm has been working with P&Z — and the public — for months on this key component of the long-term Plan of Conservation and Development (POCD) that is created every ten years.

The process began with the townwide survey, which was conducted last November, drawing participation from over 2,700 Weston citizens. It continued with two public workshops, one in which participants weighed in on big-picture ideas, another where ideas for items as minute as preferred crosswalk patterns were voted on.

Since then, the consultants have thought through the input they received, applied their own experience and expertise, and developed the master plan to be presented on Monday evening.

Mike Zuba, the lead consultant, said the master plan “sets the vision for Town Center and the roadmap to get there. Although it involved six months of effort with the community, getting it done will take a number of years and be a collaborative effort.”

P&Z chairman Ken Edgar said the presentation represents Milone & MacBroom’s final recommendations for Town Center. Their work on the broader POCD will continue for months, with plenty of deliberation by P&Z members and many opportunities for ongoing public input.

We haven’t seen the presentation, and Mr. Edgar says he hasn’t either. But based on survey results and discussions in the workshops, we expect to see a recommendation and specific ideas for expanding commercially-zoned areas in and around Town Center. It will also be interesting to see Milone & MacBroom’s ideas for taking advantage of the planned sidewalks network that will make Weston’s hub more pedestrian-friendly.

“This master plan,” said Mr. Edgar, “and the complete POCD, is central to developing a vision for Weston over the next ten years that responds to public sentiment.”