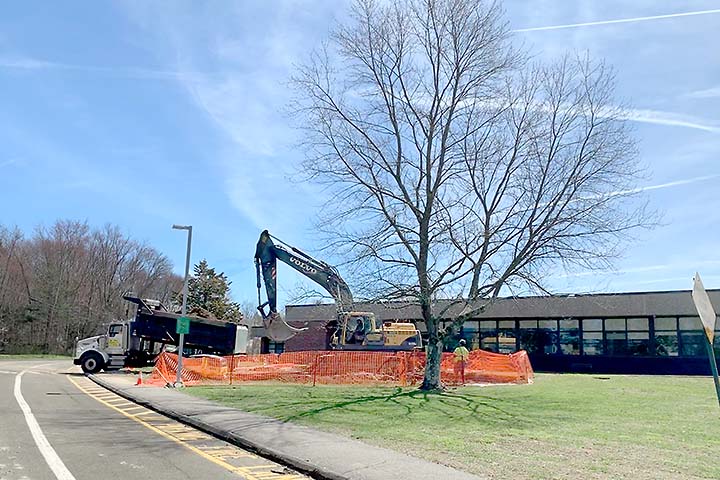 May 13, 2019 — On Thursday, May 9, the boards of Selectmen and Finance approved a special appropriation of $470,834 from Town reserves to pay for remediation of a septic system failure in February at Weston Middle School.

When a passerby reported a flow of sewage from the school toward the parking lot and road (not into the school, fortunately), district officials closed the campus. A contractor was called in and an emergency meeting was held with Town and district leaders.

As the full scope of the problem became apparent, temporary measures were considered, including deployment of portable units and ongoing tank pumping, in hopes that major work could wait until summer, possibly at lower cost.

In the end, the decision was made to implement a permanent solution immediately, partly due to the cost of schools being closed, which may be $200 thousand per day or more. After a brief school closure, the contractor completed cleanup work and emergency repairs over a weekend.

No one appears to know exactly what went wrong.

The system dates back to the major school construction project completed over 15 years ago. When digging began, excavators expected to find something wrong with a pipe that carries some Middle School liquid waste to a treatment unit. But the pipe wasn’t there at all.

Originally, all of the school’s wastewater was intended to be handled by the treatment plant, a filtration system made by Zenon Environmental Inc. But an $85 thousand budget request in 2005 to complete the connection was rejected. Instead, $15 thousand was allocated for a pipe to link to others that lead to the Zenon plant. That’s the missing one.

No one seems to know what happened to it, or if it was ever there at all. It appears on all relevant drawings. All the right signatures appear on all the right documents.

Instead of flowing to the Zenon plant, wastewater went to a large septic tank that managed to hold its own for over a decade. It is not clear it was ever pumped, or whether perhaps it was for a time, but then forgotten. In an email as the situation unfolded, Superintendent Dr. William McKersie told parents that district personnel had long believed all Middle School wastewater flowed to the Zenon plant.

Whatever happened, the tank eventually became filled with sludge and could no longer function. The contractor brought in for emergency repairs quickly built the proper connection to the Zenon plant and decommissioned the failed tank.

In the course of this work, more problems have been discovered. Another underground tank was found on the opposite side of the Middle School, connected to nothing, filled with groundwater. Its removal is part of the funded work. District officials suspect more abandoned tanks lurk in other locations and will require attention. Tanks and the leaching field at Hurlbutt Elementary are struggling under an unusually high water table.

The situation, especially with so many unknowns, is a ripe opportunity for finger-pointing. Very little of it is happening. Relations between school district and Town officials, particularly the Town’s Building Committee, have been strained of late, but all appear determined to look forward, not back.

The rapprochement comes at a good time. Recently-budgeted capital improvements at the schools are urgent, and more are on the horizon. All expert hands are needed on deck.

Questions remain about whether contractors and sub-contractors who built the schools performed satisfactorily. That is still being examined, but answers may never arrive. In Thursday’s Selectmen meeting, First Selectman Chris Spaulding said several contractors from those years are no longer in business, and some who are have been unresponsive. Friction in later projects appears to have alienated some from Weston’s affections, and vice versa.