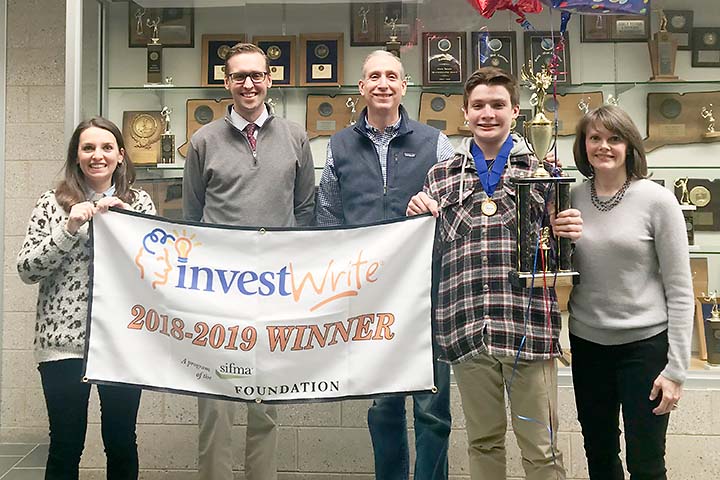 Kara Swezey and Matthew Filip of WHS, Andrew Castro holding his trophy, flanked by his parents

Mr. Castro’s task was to offer financial advice to an admired entrepreneur. The competition he entered, InvestWrite, is a program of the SIFMA Foundation, which fosters knowledge about financial markets.

Mr. Castro chose as the entrepreneur he would advise no less a figure than financial titan John D. Rockefeller.

“The SIFMA Foundation honors and congratulates our InvestWrite winner Andrew Castro and teacher Kara Swezey,” said Melanie Mortimer, President of the SIFMA Foundation. The foundation works to prepare students for their financial lives with a variety of programs, including online simulations of global capital markets. Students research and study the impact of decisions on economic opportunities, consequences, and benefits.

In his essay, Mr. Castro made recommendations to Mr. Rockefeller about the use of his company’s capital raised by the company and advised diversification “just in case there was a sudden drop in demand for his current product.”

The SIFMA Foundation gave us Mr. Castro’s winning essay to share with you, below.

John D. Rockefeller is the single most impressive entrepreneur in modern history. An ambitious bookkeeper from Richford, New York, he began an oil company that would grow to be an empire. In 1870, Rockefeller founded Standard Oil, the company that would facilitate his monopolization of the oil industry. He was able to achieve this monopoly by undercutting his competitors’ prices so deeply to the point when they went broke, at which point he would buy them out.

With this strategy, Rockefeller was able to expand his company and raise capital. By solely playing the market rather than his product, he set himself apart from the rest of the competition and became a distinguished businessman with a revolutionary strategy. This strategy developed to the point where Rockefeller owned 90% of the US oil industry. He accumulated a net worth equivalent to $340 billion today. However, in 1911, the Supreme Court ordered the dissolution of Standard Oil, declaring that it was a violation of the Sherman Antitrust Act. He then broke Standard Oil into 34 different companies, dissolving his empire.

Though Rockefeller’s method of raising capital was extremely effective, there were several other effective ways he could have raised capital. A common idea to do this would be to make Standard Oil a public company, since it was never publicly traded on the stock market.

Though this would certainly raise capital, Rockefeller would lose significant ownership in his company and would have to listen to shareholders and have less freedom in what he does with his company. Instead, he should have Standard Oil sell bonds. This way he could back them with an asset of his choice and be able to raise significant capital in a safe way that maintains his ownership of the company.

Once he has enough funds, there are several ways that they could invest to grow long-term returns, one of which would be to invest in several small startups that will likely grow immensely over time. This is an easy decision to make, as he would have plenty of money and would not need to put a ton into each startup and would have a great return if they did well.

Another intelligent long-term investment would be to diversify his company. Though he truly dominated the oil industry, it would not have been a bad idea to buy out companies that sold products other than oil, just in case there was a sudden drop in demand for his current product.

For example, he could have bought out a defense company, as World War I was on the rise and occurred shortly after the breaking up of his company by the government. He could also buy out a car company or something of the sort, since he practically dominated that industry already as well since his oil and gasoline were necessary for the operation of the car and his products were surely used in the manufacturing process of cars as well.

Though these are all very good ideas and strategies, Rockefeller did not deem them necessary or desirable, as he was by far the wealthiest man in the modern era and still holds that title to this day. Instead he became a philanthropist, donating to various health and education organizations. He was a revolutionary man and forever left a mark on the economy and American culture.