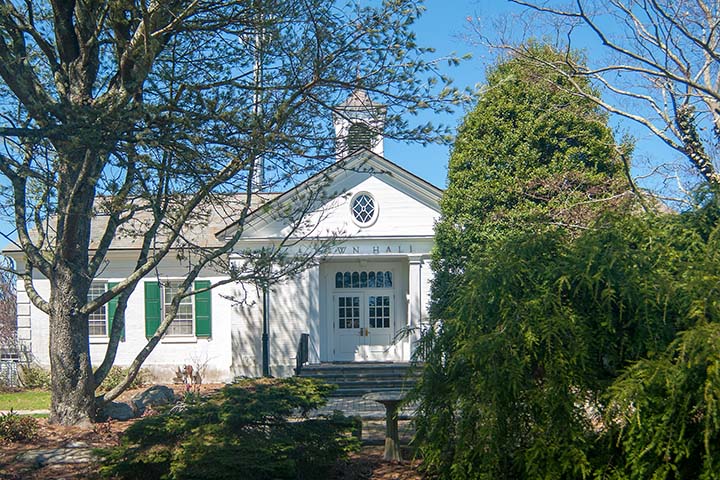 February 18, 2019 — Town spending increases in the proposed operating budget for next fiscal year by just over $433 thousand, up 3.3 percent. Unexpected costs arose at the last minute, and some services will be affected.

First Selectman Chris Spaulding presented the budget request on February 11, and the full Board of Selectmen approved. The proposal now goes to the Board of Finance.

Dr. Spaulding said the budget was designed to minimize an increase in the mill rate by economizing as much as possible. The Board voted to reduce hours at the transfer station and charge fees for Bisceglie Pond. Additional funds were allocated for road maintenance, but not enough to catch up with identified needs.

Efforts to keep spending close to current levels were thrown an eleventh-hour curve by an announcement that the Town’s mandatory contribution to the Municipal Employees Retirement System (MERS) will rise by $177 thousand.

Three other major costs were known to be rising: $178 thousand in contractual wage raises, $81 thousand for the Town’s portion of enhanced school security, and $42 thousand in higher medical insurance premiums. The First Selectman said that, without these increases and the higher MERS payments, reductions in other areas would have allowed the Town operating budget to be slightly lower than last year.

Payments to the MERS system had been predicated on an estimated 8 percent long-term return on the fund’s investments. But, two weeks ago, the State Retirement Commission cut the expected return to 7 percent. Employers — participating municipalities — must make up the difference. For large Connecticut cities, that means payments millions of dollars higher than expected. For Weston, the extra $177 thousand will be added in each of the next five years.

Last year, the Town lost over $140 thousand operating the transfer station, and will lose almost that much this year. Costs are about to increase significantly, as the contract with the company that hauls away refuse will soon be up for renewal. If the transfer station continues to operate as it currently does, in two years its deficit will reach close to $200 thousand.

To plug the hole, the administration plans to reduce the hours the station is open and raise the cost of stickers for bags of residential refuse. The new fee will be $2.50 per bag, up from the current $1.50. The Board expressed a desire for the Social Services director to explore whether there is a way for people with financial hardships to qualify for a reduced rate.

Most residents use the transfer station on Saturdays, so hours that day will not change. During the week, the number of hours it is open will be cut sharply, and the station may not be open at all on some days. The exact schedule has not yet been determined.

The pond at Bisceglie-Scribner is one of the few Parks and Recreation amenities where expenses exceed revenues, costing the Town around $30 thousand each year. In addition, an expensive replacement of the pond’s bottom looms in the near future. To partially compensate, the administration plans to charge a $25 fee for annual passes.

This was tried before. In 2010, there was a $50 annual fee to use the pond. The result was a steep decline in visitors and very little income. In the Board meeting, Dr. Spaulding expressed hope that, even with a fee, the high price of Westport beach emblems will keep the pond attractive for recreation. He said he hopes community fundraising efforts will help defray costs. He also said the fee will “give a true indication” of how many residents actually use the pond.

Public Works thoroughly assessed road conditions recently and found the Town has fallen behind on its 20-year resurfacing cycle. The department estimated it would need an additional $217 thousand next year to get back on track. That was deemed impractical, but the budget does add $50 thousand, partly offset by reductions elsewhere, including costs for part-time employees. The roadsides “may look a little scruffier for a while,” said the First Selectman. Given fiscal pressures, he said, the Town will have to “continue to under-invest in our roads.”

The budget includes investment in new equipment that will speed up repaving and reduce costs. In addition, Mr. Luiz and Public Works director Lou Martirano plan to engage a consulting engineer to help identify new approaches and technologies to raise the tempo of road improvements.

The recently-announced decline of the Grand List and an inevitable rise in the mill rate present challenges this budget season. Dr. Spaulding said the Town is in good shape financially, but there is always a worry that the State may push down a portion of teacher retirement costs. Talk of such a move appears to have revived in Hartford. In addition, proposed legislation, if enacted, would eliminate the municipal motor vehicle tax, which would reduce the Town’s resources by millions.

The Town is running a net surplus this year of about one-half million dollars and holds over $14 million in unassigned reserves. Even with the planned draw of several million dollars for needed improvements to police headquarters, the main firehouse, the dispatch center, and emergency response communications equipment, fund balances will remain well above the level that ensures the town retains its AAA credit rating.

Dr. Spaulding reported that Weston unemployment is down to 3.7 percent, the number of families needing assistance from Social Services has declined, and although new home construction is flat, building permits for home additions and remodeling are up. These are positives for the Town’s tax base in the future.