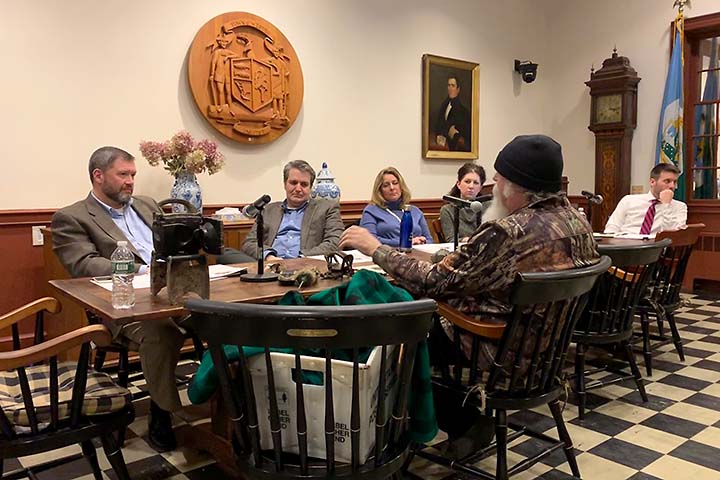 Following reports of coyotes killing pets, or being suspected of doing so, Animal Control Officer Mark Harper told the Board “there are too many coyotes in town,” and that several property owners want the population reduced.

Officer Harper displayed various types of ammunition used to kill coyotes, devices used to lure them into a targetable position, and a steel trap. He said he does not want to use traps, because “it’s too easy to get a bobcat or a dog.”

Board members appeared uneasy. Before proceeding, they want specifics and time to prepare questions. They also want to learn best practices from the Department of Energy and Environmental Protection, and indicated they would only consider authorizing action after a public hearing.

Coyotes apparently respond to reductions in force by reproducing more and at younger ages. “We’ll never get rid of coyotes,” said Mr. Harper. “But it’s time to do some management.”

The Board decided to allow Lachat Town Farm to host a private event and, if it goes well and suits the neighborhood, possibly do a limited number on an ongoing basis. The Farm’s Ellen McCormick told the Board “everything we do takes our neighbors into consideration.”

There had been a question about whether various agreements permit private events at the Farm, but legal opinions said they’re fine. Private events represent a revenue opportunity for Lachat. The funds would be used for ongoing educational programs.

The Board interviewed Debby Katz for possible appointment to the Library Board, accepted the resignation of Tony Pesco from the Lachat Town Farm Commission, and appointed Tiffany Donovan Green and Eric Shrago as alternates to the Sustainability Committee.

Plans to renovate police headquarters, the main firehouse, a small portion of Town Hall, and the dispatch center are progressing. The next step is to complete design and construction documents prior to soliciting bids. The Board voted to request a $135 thousand appropriation from the Board of Finance for that work. The project, if it proceeds, will be paid for out of reserves the Town has long been setting aside.