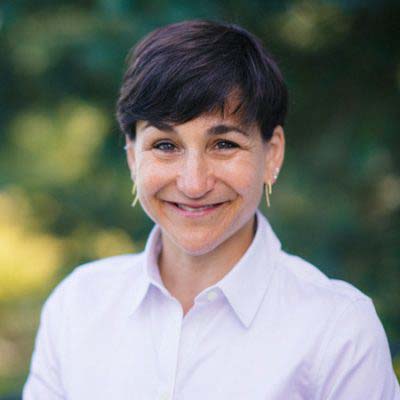 Michelle McCabe, Democrat, is a candidate for State Senate in the 28th district. This is her first campaign for public office. She is currently the director of the Center for Food Equity and Economic Development (FEED) at The Council of Churches of Greater Bridgeport.

In our interview, Ms. McCabe said her top priority would be strengthening the Connecticut economy, with a special focus on the work force. She said that, in the course of campaigning, she often hears a concern from employers that they cannot find qualified workers, which forces some companies to relocate out of state.

One approach favored by Ms. McCabe to grow the work force is a student loan forgiveness program, which would provide debt relief for graduates on condition they stay and work in Connecticut. She cited the state of Maine as having successfully taken this approach.

Ms. McCabe also favors increasing the minimum wage, but said she is “not wedded” to the $15 per hour rate, out of concern that small businesses would not be able to afford it.

Ms. McCabe would work to enact a paid family leave program, which she views as one way to subsidize small businesses in much the same way the State subsidizes large corporations with tax breaks. She views improving Connecticut’s transportation infrastructure as “critical,” and would consider tolls to raise revenue (see below). Because so much traffic heads south on congested roadways, she believes the State should help create business opportunities farther north, as a way to balance the highway load.

Ms. McCabe expressed concern that the state’s health care exchange is suffering as Federal efforts to “dismantle the Affordable Care Act” have caused rate increases. She would explore giving small businesses and individuals the ability to buy into the State health insurance program, much as some municipalities do, but does not know at this point if it is feasible.

Ms. McCabe believes Connecticut needs creative solutions to its fiscal crisis, which is largely due to a long history of under-funded State pension and health insurance obligations. She is encouraged by ideas currently being explored by the Connecticut Pension Sustainability Commission, familiarly known as the Steinberg Commission, where State assets would be placed into a dedicated trust to generate revenues to pay down the debt.

Ms. McCabe is open to collecting tolls on state highways, but would favor a flexible approach that collects full tolls for out-of-state vehicles but a reduced rate for Connecticut residents.

Ms. McCabe believes the state’s gun regulations are not strict enough, and says 3D-printed guns are of particular concern. She believes that “sensible gun owners” should be brought to the table in an effort to find ways to strengthen the permit process to keep guns out of the hands of people who should not have them.

Ms. McCabe would support legislation to stop the Department of Transportation from spraying Roundup on Connecticut roadways.

Ms. McCabe says she has a strong background of advocacy and public policy. She believes that it is important for legislators to not only listen but to act. “Consensus-building is the key,” she says. “Top-down approaches don’t work. There are plenty of opportunities for people who see things differently to still come to agreement on common interests. We have to be fearless about doing that.”