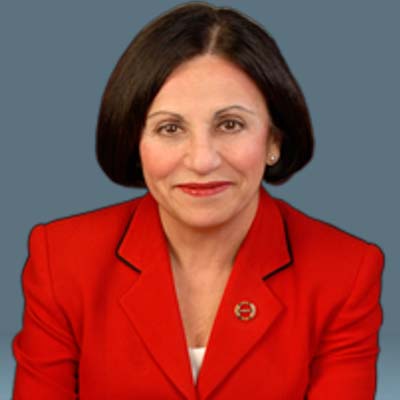 Toni Boucher, Republican, is the incumbent 26th district State Senator. She was first elected to the office in 2008 after serving 12 years as a State Representative.

Ms. Boucher described her top priority as strengthening the Connecticut economy. She is particularly concerned about “the tenuous job market,” and that home values are in decline while taxes are going up. This is particularly an issue for seniors who, she said, “are worried.”

Another priority is education, and in particular education funding. “Weston is fortunate to have one of the best school systems in the country,” she said. She described steps that were considered in 2017 to force municipalities to absorb millions of dollars of State pension and health insurance costs as a “potentially catastrophic” for towns like Weston, and was pleased that an 18-18 tie between Republicans and Democrats forced a budget compromise that eliminated the threat.

Finally, she said transportation is a priority and that a short and long term plan is needed to take full advantage of new technologies. She described the state’s transportation infrastructure as a major hindrance on economic growth. “The State must stop raiding the transportation fund,” she said, and added that protections must also be put in place for the Tobacco and Health Trust fund and the Clean Energy fund.

Ms. Boucher cited budget numbers indicating the State’s fiscal crisis is largely due to pension and health insurance benefits for active and retired State employees and teachers. She said that public unions must scale back benefits. She described a health insurance plan that contains no co-pay as “unheard of,” and said the same is true for a health plan that has prescription prices as low as two dollars. She said that State employee plans should more closely resemble those of local governments.

Ms. Boucher also believes that the State can achieve budget savings by better management of State agencies, and said there is “great waste” in many departments.

Ms. Boucher is open to considering tolls as a “viable revenue source,” but is cautious. The State receives federal funds as compensation for removing tollbooths years ago. Ms. Boucher worries that re-instituting tolls would cause the State to lose those funds. She believes the gas tax “is more fair,” and does not support proposals such as congestion pricing, which would force people off highways and on to local roads, and would also place the heaviest burden on workers.

Ms. Boucher said she believes Connecticut laws should be strengthened with regard to firearms storage and is concerned about 3D-printed guns. She voted for legislation that banned bump stocks. She said she would support measures to regulate ghost guns and provide stricter penalties for those threatening gun violence. She is opposed to the idea of arming teachers, and is proud of her support for SB 1160, which strengthened Connecticut’s gun laws in the aftermath of Sandy Hook. She said she “probably took more heat than anyone” from gun rights advocates as a result of her vote on that legislation.

Ms. Boucher supports supports the amendment to ensure that Special Transportation funds are only used for transportation purposes. She is concerned that it does not guarantee that revenues which should go into the fund are actually deposited. She also supports the proposed amendment to require public hearings for the sale or transfer of State-owned property.

Ms. Boucher would support legislation to stop the Department of Transportation from spraying Roundup on Connecticut roadways. She said she understand DOT’s practice of removing vegetation in the interests of public safety, but said “health is just as important.” She is concerned about runoff into wells, and said she is “adamant about clean water.”

Ms. Boucher cited her years of service in the State Legislature and her record. She described herself as a “pro-choice, pro-gay marriage social progressive but fiscal conservative.” She is proud of having championed Holocaust education in public schools after a ten-year effort. She reiterated her concern for the state economy. She said that as (with her husband) a business owner, she is particularly concerned about the viability of small businesses in the state.