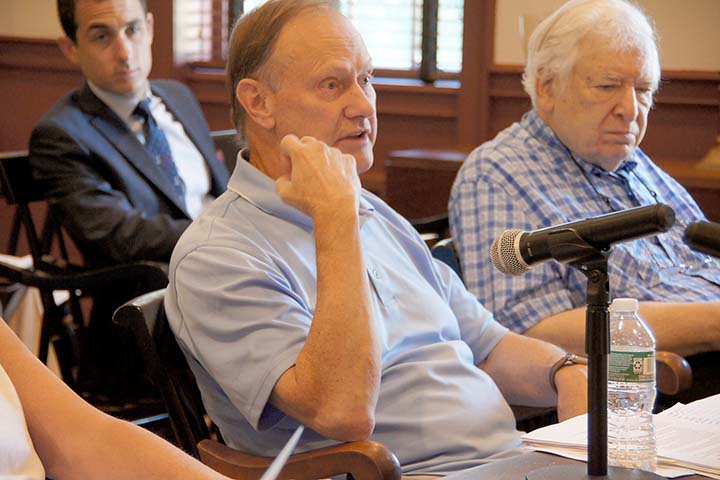 September 7, 2018 — In a special morning meeting of the Board of Selectmen on September 4, the Planning and Zoning Commission presented a request for a $27,030 supplemental appropriation for the Town Plan of Conservation and Development (POCD).

The POCD is a long-range strategic plan which, by law, every Connecticut town and city must prepare and file every ten years. The language of the statute specifies that it be a thoroughgoing statement of the "policies, goals and standards for the physical and economic development of the municipality" and include provisions for conserving and restoring the natural environment, historical resources, and "protection of environmental assets critical to public health and safety."

The plan is meant to anticipate the town's needs for everything from housing, drinking water, education, health, recreation, social services, public utilities, public protection, agriculture, and transportation to interpersonal communications, renewable sources of energy, and the effects of sea level change.

It's big. It often requires the services of a consultant.

To economize, some towns go through the motions and have staff knock out a minimally compliant document. In this year's budget cycle, the Board of Selectmen briefly entertained such an approach. Determined to keep the mill rate increase as small as possible, the Board scrutinized every expense.

Most of the higher cost is due to the need for a plan that goes beyond the minimum requirements. Specifically, the plan envisaged by P&Z will also contain a thorough study of town center, an analysis of town-owned properties, and plans to develop walking and cycling opportunities.

At Tuesday's Selectmen meeting, Planning and Zoning chairman Ken Edgar told the Board that "in order for this to be a meaningful exercise," the Town, the schools, and the public would have to work together. The commission chose a consultant that uses a Charrette process, which is an approach where citizens, planners, and Town officials collaborate and become the plan's mutual authors.

First Selectman Chris Spaulding emphasized that aspect, since an important part of a town plan is determining what amenities the public wants. "We need to engage the whole population so that everybody is engaged in the discussion," he said, and noted that the Town will be conducting a citizen survey. "But the Charrette process is iterative," he added, "it helps you get even more than you learn from a survey. You get the subtleties of what people in Weston want."

Mr. Edgar agreed, and described how the process will work, particularly in regard to town center. "This is not just a bunch of consultants telling us what they think we should do with downtown," he said. "They do their study and start thinking about what we can do. Then we have a public process where people participate in identifying uses. The consultants go back and think about what they've heard. Then there is another public meeting where they present some preliminary findings, get some feedback, and only then come to us with final recommendations."

Selectman Stephan Grozinger, a former P&Z chairman, was enthusiastic. "Let's acknowledge that Weston has some challenges, like other towns around us," he said. With so few unbuilt lots and a small commercial area, "we're not going to develop our way out of them. There's no anticipation we can grow the commercial tax base enough to do anything. This is about making Weston even more charming than it already is."

With that, the Selectmen approved the supplemental request. That evening, some members of the Board of Finance weren't so sure.

Final Approval: the Board of Finance

Hours after meeting with the Selectmen, Planning and Zoning came back to the Town Hall Meeting Room to seek final approval from the Board of Finance.

Board member Bob Ferguson objected to increasing POCD funding, since town-owned acreage around Weston Center is relatively small and the center itself is privately owned. Mr. Edgar responded that P&Z is currently being asked to make zoning decisions about properties adjacent to Weston Center, and is reluctant to do so in the absence of "a vision of how all these properties are to be used."

Allan Grauberd was particularly enthusiastic that the study would include a look at the possibility of having bicycle lanes throughout town. "It's dangerous to bike around here," he said.

Chairman Steve Ezzes had doubts about common assumptions that Weston Center can be developed as a more vibrant business center. He said there is "conjecture that some of the businesses in Weston Center don't do well," and wondered if additional businesses would be viable in Weston's local economy. "We're a town of 10,000 people with a quarter of the population in school and some portion leaving town to go to work." He said "this town needs an economic study and a traffic study before it needs a study of town center."

Mr. Edgar replied that the proposal calls for a much more expansive study and does not presuppose findings about Weston Center. From the audience, Dr. Spaulding agreed with the need for an economic study, but argued that it would more suitably follow the POCD and its public survey component.

Finance Board member Jerry Sargent supported the supplemental, saying it provides for a more comprehensive plan. He, Mr. Bochinski, Mr. Grauberd, and Rone Baldwin voted in favor, and it was approved. While supporting the POCD, Mr. Ezzes and Mr. Ferguson voted against the supplemental to expand it.

At the end of the meeting, Mr. Ferguson announced his resignation from the Board of Finance. He is moving to Wyoming.