Board of Finance Approves SRO Funding 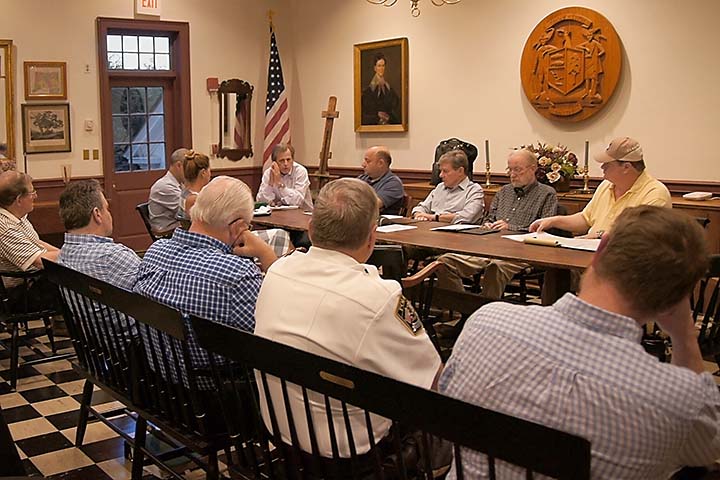 July 13, 2018 — The Board of Finance reconvened on Thursday evening, July 12, to continue discussion and render a decision regarding a supplemental appropriation to fund an additional School Resource Officer (SRO) and increased police overtime to patrol the "Mile of Safety" full-time. Combined, the request came to $158,220.

The proposal had previously been approved by the Board of Education, Board of Police Commissioners, and Board of Selectmen. It first came to Finance on June 14. A decision at that time was postponed after a lengthy and often contentious meeting. (See related article.)

Thursday evening's session was, at times, equally heated. Ultimately, the Board approved the request, but only by a 4–2 vote.

The Weston Police can now hire an additional officer, and Chief Edwin Henion can designate a second SRO, who will be assigned primarily to Weston Middle School. Coverage of the campus by regular patrol officers will increase to the full school day.

Not At Issue: The SRO, Or the Overtime

Minutes after the scheduled start, the Board adjourned to executive session for over an hour to discuss campus security with police and schools leadership. When they returned, none spoke against the SRO position or increased overtime. Several expressed support. The Board's focus was entirely on whether the Board of Education and the Town should offset some of the additional funds by reducing expenditures elsewhere.

Board member Rone Baldwin said there should be an "unsympathetic reaction to special appropriations that aren't self-funded" with offsetting cost reductions. While agreeing with the need to hire the SRO, Mr. Baldwin was displeased that the funding request came with no such offsets. He suggested that the police and schools should each reduce costs by $20,000, which would allow the Board to reduce the special appropriation by 25 percent.

Two weeks into a new fiscal year, operating with a budget the Board of Finance in April described as "lean" and presented to voters, neither the schools nor the police conceded that cost reduction opportunities could be readily identified.

Board member Allan Grauberd offered an approach that would also address an issue that had been bothering him for weeks, but one that complicated the discussion.

Very Much at Issue: Cost Sharing

In planning the 2018-19 budget, the Town had initially intended to outsource information technology (IT). When contractual concerns arose, the Town reversed course and decided to continue having those services provided by the schools. The costs would be shared. But after a complicated set of allocations during and after the budget cycle, it appeared to Mr. Grauberd that taxpayers were accidentally being double-billed for the police IT system. As he saw it, the Town would be paying the schools $70,000 for $35,000 worth of services. 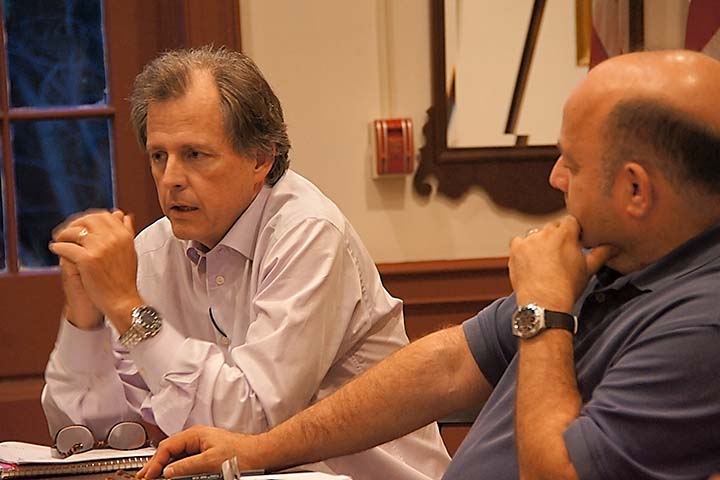 And so, Mr. Grauberd proposed that a way to meet Mr. Baldwin's desire for offsets and his own desire to correct the double billing error was to either cut $35,000 from the Board of Education or half that amount from education and half from the Weston Police.

By this point in the meeting, it seemed there was a consensus in a majority of the Board that the SRO and overtime supplemental should be reduced in some fashion. Chairman Steve Ezzes reminded his colleagues that, last month, member Jerry Sargent had suggested reducing it by $20,000 in anticipation of overtime savings, and indicated he felt the same way.

Board member Richard Bochinski differed, saying that overtime could actually increase while a new SRO was in training. Mr. Ezzes replied that, in such an event, another special appropriation could be proposed to address it.

Mr. Baldwin returned to a theme from the previous meeting, where he expressed a strong desire to have, going forward, police costs directly related to the schools shared between the Town and the Board of Education. Member Bob Ferguson agreed. Currently, the costs of the SRO are borne completely by the Town, but overtime costs of the Mile of Safety patrol are shared.

Eventually, it became clear that several unrelated issues were being conflated: the request to fully fund the SRO and added overtime, the shared IT services agreement, the philosophy that supplemental requests should be accompanied with at least partial offsets, and the idea that costs should be shared between the Town and the schools.

Mr. Bochinski suggested doing it more simply: fully fund the SRO and overtime, and have the Board of Education and Town commit to coming back in good faith with a negotiated solution to the technology double billing. First Selectman Chris Spaulding said that, from a budget and accounting perspective, this was the safer and more sensible way go. He and Board of Education chair Gina Albert agreed to the understanding.

Thus, Mr. Bochinski's motion to approve the supplemental request passed by a vote of 4 to 2. The ayes were Mr. Ezzes, Mr. Bochinski, Mr. Ferguson, and Mr. Grauberd. Mr. Sargent was not present.

By telephone, Melissa Zales Koller voted no, repeating her objection from the June meeting that the public should be allowed to vote on the matter.

Mr. Baldwin also voted no, saying that while he supported adding an SRO, he was "disappointed this Board would pass a special appropriation right after the budget cycle without any self-funding," and that he couldn't support it for that reason.

Asked for a reaction after the meeting, Mr. Spaulding said "I'm very pleased the Board of Finance agreed to fund the School Resource Officer. The existing SRO is a complete success. I expect similar results from the new one."

At the end of the meeting, Finance Director Rick Darling told the Board that with the state's final budget in place, Weston will receive $334,000 in Education Cost Sharing and Municipal Stabilization grants. During the budget season, with the upheaval in the state's fiscal process, the Town was conservative and anticipated no such revenue from Hartford this year. As recently as four years ago, Weston received $1.5 million in such funds.