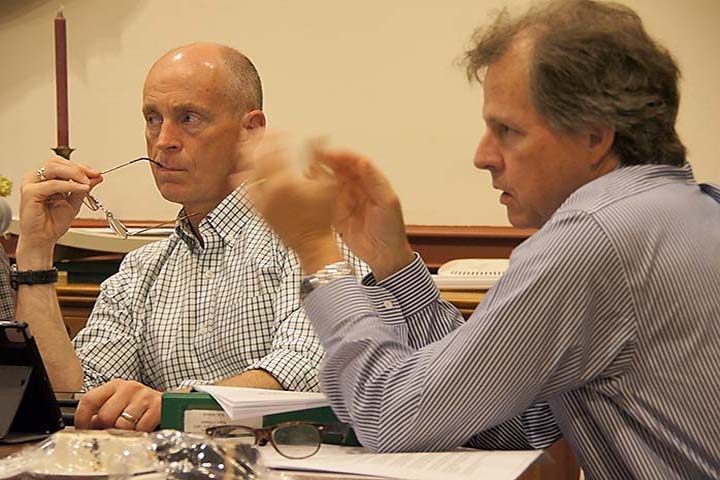 June 18, 2018 — The last stop for a proposal to increase school security was the Board of Finance, which took up the matter in its June 14 meeting. Things did not go smoothly.

By the end of an often contentious discussion, the Board voted to defer a final decision until its next session, currently scheduled for July 12. It seems likely that the Board will ultimately approve the request, but less certain it will do so in its present form.

The proposal, developed jointly by School Superintendent William McKersie and Police Chief Edwin Henion, calls for adding a School Resource Officer (SRO) at Weston Middle School and increasing the Police Department overtime budget. The additional overtime would enable having a patrol officer at the schools — primarily at Hurlbutt Elementary and Weston Intermediate — throughout the school day, an increase from the current six hours of coverage.

The plan was first presented in a public letter on April 17 by Dr. McKersie and Chief Henion. It was subsequently approved by the Board of Education on April 23 and the Police Commission on May 1. By this time, the 2018-19 Town and Education budgets had been passed by voters.

So it came to the Board of Selectmen on May 17 to vote a supplemental appropriation of $158,220 to a budget the public had approved only three weeks earlier.

None of this sat well with the Board of Finance, whose role is, as one longtime observer put it, to be the strict parent of municipal government.

Chairman Steven Ezzes opened the meeting by saying he is "totally in favor" of the plan, but "not in favor of the process that got us here." Board member Rone Baldwin agreed, describing "a process breakdown," adding that "this Board should have been clued in on this. Some people in town can perceive it as a bait and switch."

"Events overcame us," replied Chief Henion, saying that the mass school shooting in Parkland, Florida on March 14 precipitated a reassessment of Weston's school security. The district first presented its proposed budget to the Board of Finance that same evening, far too early to rethink and alter an entire security strategy, and certainly too soon to include a request for a new full-time position.

That budget did, however, contain what became a controversial decision to cut two security positions — unarmed guards — and save roughly $95 thousand. In the meeting that evening, Dr. McKersie and Chief Henion were asked if they still believed the plan was wise. They said they did.

They described how improvements in school security, police presence, technology, and hardening of structures made it possible to reduce the two positions and save money while improving overall security, a message they carried to every subsequent budget hearing. It never quite connected with a significant segment of the public.

A large group of parents mounted a campaign in meetings, phone calls, social media and petitions to restore funding for the two security specialists. Several spoke passionately at the Board of Finance hearing on March 22. On March 26, Dr. McKersie and Chief Henion tried to reassure parents in another public letter.

There is no doubt that the superintendent and chief's task was complicated by the need to withhold details of new or existing security measures. But the public had the same challenge. Without knowing details or possessing security expertise, they could either insist the two positions be restored or defer to the authorities. Many could not defer, and continued to press the case for restoring the positions.

Nevertheless, by April 3, when the budget recommendations which would be put to a town vote were finalized by the Board of Finance, the security plan had not been changed. Chairman Ezzes and member Bob Ferguson asked if the school district would like the Board to restore the $95,000. The offer was declined. Board member Richard Bochinski noted that, as plans continue to be reviewed, the school district and police may need to return with a request for a supplemental appropriation.

Mr. Bochinski's statement echoed an earlier comment at the March 14 meeting by Board member Jerry Sargent, who said that the police and school district should "come back to us if anything changes" and "if you believe it's different from what the last assessment was, you ought to come to us and talk to us."

A Much Bigger Decision?

Supplemental appropriations generally come from Town reserves. At present, Weston's reserves appear to be ample for covering unanticipated needs and maintaining Weston's credit rating. But the Board of Finance had already authorized drawing upon them a bit to minimize an increase in next year's mill rate. The Board appears to be quite reluctant to touch them further.

Several members complained that they had received only bottom-line numbers of the appropriation, not enough about the rationale for the plan itself, no details about the funding requirements, and little insight about the larger financial impact.

As a result, much of the discussion focused on the true cost of the decision. Mr. Baldwin said "This is not a $150 thousand decision we are making," because the town will bear the cost for many years. "It's a two or three million dollar decision. Let's not get rushed into making a two or three million dollar commitment without making sure we have all the issues explored."

Dr. McKersie pointed out that the cost of the SRO — $120 thousand of the total request — nets out to only about $26 thousand, considering the $95 thousand saved by eliminating the two security specialists. However, the Board of Finance and voters had approved a budget with that figure already subtracted, a budget that did not contain funding for the new SRO and increased police overtime.

Mr. Ezzes expressed concern that the plan was a "piecemeal" approach. Chief Henion said it was, indeed, an incremental effort, and described it as a "natural progression," a speeding up of a measure that probably would have been requested in the 2019-20 budget anyway, considering the increase in school incidents. The chief said Weston's approach is "extraordinary," especially when contrasted with other towns that are doing nothing to prevent school violence other than increasing police overtime.

Board member Melissa Zales Koller said "this Board and the public who voted weren't aware this was a work in progress. I would feel much more comfortable passing this and then sending it on to voters rather than just passing it."

Board of Education chair Gina Albert said the plan "didn't come to fruition just because of what happened in Parkland. Post those events, we had a rise in incidents here in Weston. There was a pattern we needed to respond to. Our SRO program is working well. It has saved at least one life this year, if not more." She added that "these things came to light later in the [budget] process, and there was no way to go back and redo what had been done."

Alternatives to an SRO?

Most of the Board — but not all, at least not completely — accepted that the idea to add a middle school SRO is a good one. Mr. Ferguson wondered whether a wiser and more economical course would be to hire armed School Security Officers (SSOs) for the middle school, Weston Intermediate School, and Hurlbutt Elementary.

After Sandy Hook, the state legislature authorized schools to hire armed SSOs, retired police officers who are paid less than SROs. They typically do not carry additional costs for benefits, as their pension and health insurance benefits are provided by the state.

Dr. McKersie said current policy, like those of most other school districts, forbids armed personnel on campus who are not members of the local police department. He doubted that the Board of Education would ever change that policy, said he would not recommend doing so, and noted that school administrators do not want to manage firearms, weapons training, ammunition, and armed personnel.

The difference between SROs and SSOs is fundamental. SSOs are in place to react to violent incidents and stop them. SROs exist to anticipate and prevent such incidents.

Ms. Albert explained that SROs are "heavily involved" with students, and "often the first to be alerted that something is going on." They help students deal with issues like drugs, social media abuse, and sexual harassment. "This plan," she said, "addresses security and also addresses behavioral, social, and emotional needs." SSOs are not trained for that role.

Chief Henion agreed. "My goal is to never have to respond to a violent situation. We have intervened with high risk children and probably have prevented them from carrying out something. Those incidents are increasing, and at lower school levels."

Mr. Ezzes asked Chief Henion if he wouldn't rather have an armed security guard at the schools that do not have an SRO. "I don't think so," said the chief, explaining that the campus officer solves that need.

Early in the meeting, Mr. Ezzes asked Chief Henion what the SRO would do in the summer. The chief said the officer would return to normal patrol duty, which could help reduce overtime. At the moment, the police have spent around $20 thousand less than is budgeted for overtime, money that will be returned to the Town general fund at the end of the fiscal year on June 30.

Mr. Sargent said, "We should have had this discussion months ago," and proposed that the Board reduce the appropriation by the $20 thousand of overtime savings. The idea developed traction with other members.

Mr. Baldwin, while saying he was "more confident now this is well thought out," took it a step further. Given that the plan would hit only the Police Department budget, he said "we need to look at offsets." He wondered if there should be a budget transfer from the Board of Education so the schools would have "skin in the game," and expressed a general desire for the Town and Board of Education to have more of a shared budget.

From the audience, First Selectman Chris Spaulding commented that this would hurt the schools district's per pupil spending rate, putting it at a competitive disadvantage with other jurisdictions. Ms. Albert added that it would also impact how much Weston schools get from state reimbursement for special education overages.

Even though Town and Education funds are not separated in the wallets of taxpayers, budgetary considerations such as these have a larger impact on Weston's financial position than immediately meets the eye.

By its conclusion, a long meeting had covered a wide range of complicated issues, and Board member Allan Grauberd suggested taking more time to digest all the information and think. Mr. Ezzes said that Westport, confronting similar issues, is currently doing the same thing.