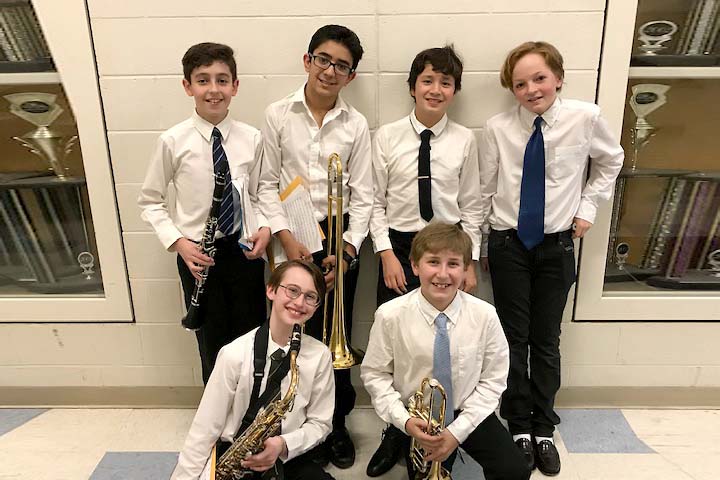 May 12, 2019 — On Friday evening, six Weston Middle School musicians joined peers from other towns in the annual “Play with the Community Band” program in Westport.

The Westport Community Band is a non-profit organization affiliated with Westport Continuing Education. About 65 members come from all over Fairfield County. Some travel from out of state. You may have seen the band perform at Weston’s fourth of July celebrations and other town events.

The musicians who participate work hard, attending several rehearsals and working with fellow students. Younger students are mentored by members of the band. The groups are led by longtime Westport Community Band director Sal LaRusso, who also conducts the WesWinds Ensemble at Wesleyan University and is an instructor of instrumental music at the Cider Mill Elementary School in Wilton.

This year’s program was made possible by a grant from the Westport Women’s Club.

Over its 23 years, response to the program from student musicians, school band directors, and parents has been overwhelmingly positive. One member of the adult Westport Community Band is a former student musician who is now a music educator himself.

In addition to mentoring students, the Westport Community Band performs at community events throughout the area, including appearances at the Levitt Pavilion, the annual Veteran’s Day observance at Westport Town Hall, Westport’s Memorial Day parade, the Weston Family Fourth, and musical visits to local nursing homes, senior centers, and libraries.

The Side By Side Charter School musicians are flutist Chamiane Halimana and clarinet player Dinyar Unvala.